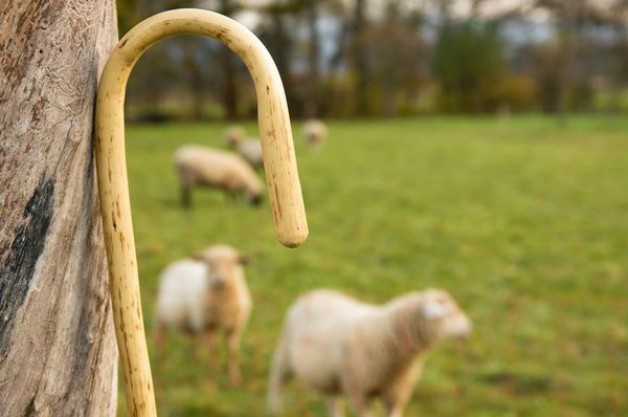 In 1862 Joseph Gilmore wrote one of the more familiar of our traditional hymns: He Leadeth Me.

He leadeth me, O blessèd thought! O words with heav’nly comfort fraught!
Whate’er I do, where’er I be, Still ’tis God’s hand that leadeth me.

When Jesus turns to describe himself as the Good Shepherd who lays down his life for his sheep, he not only speaks of how he loves us but also how leads us.

“Truly, truly, I say to you, he who does not enter the sheepfold by the door but climbs in by another way, that man is a thief and a robber. But he who enters by the door is the shepherd of the sheep. To him the gatekeeper opens. The sheep hear his voice, and he calls his own sheep by name and leads them out. When he has brought out all his own, he goes before them, and the sheep follow him, for they know his voice. A stranger they will not follow, but they will flee from him, for they do not know the voice of strangers” (John 10:1-5).

This is truly good news. Jesus not only knows us personally and intimately, he not only loves us as “his own,” but he also speaks to us in a voice that is immediately recognizable. This is how he leads us. At the end of John 10:3 we see that he “leads them out.” In v. 4, “he goes before them, and the sheep follow him.”

Hearing God’s voice is essential to any truly personal relationship. Fellowship and intimacy are impossible without communication. Mute affection is a contradiction in terms. He speaks to us primarily in and through his written Word. Do you realize that the Good Shepherd, Jesus Christ, is speaking to you personally and intimately every time you read your Bible? He is doing it through the very words you see on the pages of your Bible. Seeing and reading Scripture is not only a supernatural experience, it is an expression of the shepherd’s voice being heard by the sheep!

Unlike shepherds in the modern, western world who drive their sheep, often using a sheep dog to keep them under control, shepherds in the ancient near east lead their flocks, their voice alone providing the guidance necessary. Thus we read in Psalm 23 that as our shepherd “he leads” us beside still waters and “he leads” us in paths of righteousness (Ps. 23:2b, 3b).

God isn’t surprised by your trials. He doesn’t just follow along behind you mopping up the messes of your life. He goes before you, he leads you, stepping out ahead and setting a straight path. Joni Eareckson Tada put it this way:

“God is more than an emergency phone number. He’s more than a clean-up crew with hammer and nails and glue. He’s more than an insurance adjuster with a sharp pencil and a big checkbook. He’s out in front of you . . .preparing, planning, going before, leading and guiding you every step of the way” (100).

So he told them this parable: “What man of you, having a hundred sheep, if he has lost one of them, does not leave the ninety-nine in the open country, and go after the one that is lost, until he finds it? And when he has found it, he lays it on his shoulders, rejoicing. And when he comes home, he calls together his friends and his neighbors, saying to them, ‘Rejoice with me, for I have found my sheep that was lost’ (Luke 15:3-6).

This is why he is such a Good Shepherd. Praise be to God!