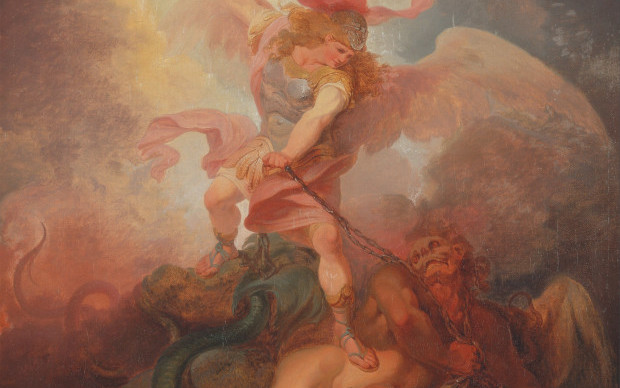 Revelation 20 is the only place in the Bible that speaks of “the millennium”—the thousand-year reign of the triumphant Christ on earth. Nowhere else does Holy Scripture mention this word, so it is necessary to look at related teachings elsewhere in Scripture to understand what it means in Revelation. A sound principle of biblical interpretation (used from ancient times by Augustine, Tychonius, and other early Christian writers) is that one interprets the few mentions of a word or concept in light of the many, and the symbolic in light of the plain. It would be contrary to a clear understanding of the Scriptures to make the many fit into the one, or the plain into the symbolic. Therefore, we should understand what Revelation 20, a highly symbolic book, says about the millennium in light of the very large number of other biblical passages that tell us more plainly (and less symbolically) what occurs between Christ’s resurrection and ascension to heaven, and His final return to earth to complete His victorious work. With that in mind, let us seek biblical help in order to make sense of the very first thing that is said to occur in this thousand-year period between Christ’s two comings: the binding of Satan.

Revelation 20:1–3 says that a mighty angel from God binds the Devil for a thousand years. Specifically, verse 3 relates that he is bound from deceiving the nations during this period. Something happens to Satan’s ability to keep the nations of earth blinded from seeing who God is, and what His gospel means for them. As a result of Christ’s finished work in dying on the cross, in rising from the dead, in ascending to the Father, and in being crowned on the throne of glory, Satan lost his power to deceive the untold millions of pagans, whom he formerly kept blinded to God’s saving truth.

The ancient story of Job may give us some important insight into this massive reduction of Satan’s power over the heathen nations. Job 1:6–12 portrays Satan as possessing the ability to come into God’s immediate presence along with other angels, or “sons of God” (v.6). He used this place of power to cause great harm to Job. But according to what Christ says in the Gospels, Satan lost that privileged access to the heavenly courts as a result of the incarnation and work of Christ. In Luke 10:18–19, the seventy disciples return with great joy from their successful mission in preaching the gospel, healing the sick, and casting out demons. Christ then explains how they were able to accomplish these wonders: “He said to them, ‘I saw Satan fall like lightning from heaven’” (v. 18). Jesus explains Satan’s fall in terms of Christian ministry: “Behold, I have given you authority to tread on serpents and scorpions, and over all the power of the enemy, and nothing shall hurt you” (v. 19).

It is significant that the first beings to recognize the incarnate Christ, according to the gospel of Mark, were demons. Mark 1:24 and Luke 4:34 are among the passages that show the demons crying out in terror that the Holy One of God has come to torment them. Jesus explained that when He cast out demons by the Spirit of God (Matt. 12:28–29), it meant that the kingdom of God had come. In His work, He was binding the strong man (that is, the devil), who formerly had been keeping people in the dark and painful prison of unbelief, sin, and certain judgment.

After the Lord’s crucifixion and resurrection, and immediately before His ascension back to the Father, He commissioned the church to “go . . . and make disciples of all nations, baptizing them in the name of the Father and of the Son and of the Holy Spirit” (28:19). They would be able to do this because of Christ’s victory over Satan, who had long blinded the nations, for Jesus said, ‘All authority in heaven and on earth has been given to me’ (v. 18). Satan’s illegitimate power over the nations has been wrested from him, and placed into the hands of the legitimate Lord and Savior of the world. Now the Christian church can do its work; it can engage in successful mission all over the world, bringing the good news of freedom from captivity to those who had long been in chains because of sin and unbelief.

Colossians 2:14–15 makes it clear what happened to the powers of evil through Christ’s ministry, especially what He accomplished on the cross: “[He] cancel[ed] the record of debt that stood against us with its legal demands. This he set aside, nailing it to the cross. He disarmed the rulers and authorities and put them to open shame, by triumphing over them in him.” This indicates that wicked powers were defeated in principle at the cross of Christ. When Jesus purged all of our sins on Calvary, something happened to Satan. The evil one lost his authority to keep people back from God. He was bound by what Jesus did.

The missionary journeys of the Apostle Paul into the pagan territories of Asia Minor, Greece, and Rome were successful in turning the once-darkened nations to the saving light of God in Christ on the basis of the binding of Satan. Paul says in Acts 28:28, “Therefore let it be known to you that this salvation of God has been sent to the Gentiles; they will listen.” That has been the engine of all Christian missions and evangelism from that day to this one.

How long does the millennium last? There can be no doubt that it began with the completed work of Christ on earth. Revelation 20 follows immediately upon Revelation 19, which celebrates the triumph of the One who is “King of kings and Lord of lords” (v. 16), whose robe was dipped in blood (v. 13), and who now rules the nations with a rod of iron (v. 15). But when does it end? Revelation 20 presents it as continuing until the end of the age, when after a brief uprising by Satan, the final judgment takes place (20:7–11). That means that the evil one is bound from deceiving the nations until just before the conclusion of salvation history.

Why, then, does Revelation use the expression a thousand years? In terms of biblical numbers, ten represents fullness, and a thousand is ten times ten times ten, hence fullness times fullness times fullness. It seems to equal a vast number of years without being a precise chronology of human history. Nowhere else does Scripture limit the binding of Satan and the success of the church’s mission to a specific period of time before the end of the age. Moreover, there are other places in Scripture where the word thousand is used without being a literal number. In Psalm 50 this same number is employed in a different context, where it says that God owns “the cattle on a thousand hills” (v. 10). This could not mean that the only thing God owns in His creation is one thousand hills, for “the earth is the Lord’s and the fullness thereof” (24:1). It is an expression for fullness. It is the same in Psalm 68:17, where the chariots of God are said to be “twice ten thousand.” It is highly unlikely that God has only twenty thousand active angels at his behest, for Christ on the cross could have called down twelve legions of angels (Matt. 26:53), which is far more than twenty thousand. The message in Psalms 50 and 68 is one of fullness, and it is the same in Revelation 20. One day, the fullness of the elect will be brought into the church, and then the end will come. It is not a matter of literally one thousand years, but of God’s secret timing as to the gathering of His people into union with Christ, however long that may take from our human perspective.

Although the evil one still has limited power in a fallen world, it is far less than what he had when he was able to bind and blind all nations outside Israel. And believers can still overcome even Satan’s limited power, for James 4:7 commands us, “Resist the devil, and he will flee from you.” Revelation 12:11 testifies of the embattled saints that “they have conquered him by the blood of the Lamb and by the word of their testimony.” Hence, on the foundational truth of Satan’s having been bound from blinding the nations, the church may daily pray, “Your kingdom come, your will be done, on earth as it is in heaven” (Matt. 6:10), and find comfort in God’s assurance: “Ask of me, and I will make the nations your heritage, and the ends of the earth your possession” (Ps. 2:8).