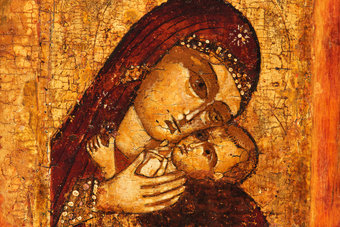 The second member of the Trinity is, like the first and third, omnipresent. Wherever you go, he is there. In fact, more than that, the Bible says he sustains all things: he “upholds the universe by the word of his power” (Heb. 1:3), and “in him all things hold together” (Col. 1:15).

The miracle we celebrate each year at Christmas (the incarnation, when the Son of God became a man) raises a question about this theology. Was he still omnipresent in, say, the year AD 10, while walking around Nazareth as a boy? Or what about while he was a baby, nursing at Mary’s breast among the manger animals—can we really imagine that, at the same time, he filled the entire universe, governing every quark and star?

According to the so-called extra Calvinisticum, the answer, amazingly, is yes. God becomes man without ceasing to be God, and thus the incarnate Son of God was not limited to his human flesh, but continued to fill and uphold the universe even while incarnate.

How in the world could this be? Libraries could be dedicated to exploring this doctrine, but let’s just ask three basic questions about it, in the hopes of recalibrating our hearts and minds to the staggering event we celebrate this time of year.

WHAT DOES IT MEAN?

Extra Calvinisticum is a Latin phrase—Calvinisticum means “Calvin’s” and extra means “outside” or “beyond.” It comes from 16th- and 17th-century debates between Lutheran and Reformed theologians about how Christ is present during the Lord’s Supper. Lutherans had objected to the Reformed teaching that God’s incarnate Son retained existence “beyond” his flesh. In the Institutes of the Christian Religion, John Calvin wrote:

The Son of God descended from heaven in such a way that, without leaving heaven, he willed to be borne in the virgin’s womb, to go about the earth, and to hang upon the cross; yet he continuously filled the world even as he had done from the beginning!

But the basic idea involved in this doctrine didn’t originate with Calvin. It’s ancient. Back in the fourth century, Athanasius wrote:

The Word was not hedged in by his body, nor did his presence in the body prevent his being present elsewhere as well. When he moved his body he did not cease also to direct the universe by his mind and might. . . . At one and the same time—this is the wonder—as Man he was living a human life, and as Word he was sustaining the life of the universe, and as Son he was in constant union with the Father.

Note that Athanasius emphasizes not merely the Son of God’s existence beyond the flesh of his human body, but his role as the sustainer and director of the universe. In Calvin’s sermons and commentaries, he emphasizes not merely the spatial character of the extra, but its implication for Christ’s governance of the world and mediatorship over the angels. The important thing is not omnipresence per se, but that the Son of God remains fully divine—with all that that entails—even during the incarnation.

HOW DOES IT MAKE SENSE?

The extra Calvinisticum is, to say the least, a difficult concept to wrap our brains around. The first time I heard it, two challenges sprang to mind.

First, is this irrational? How does it not violate the law of non-contradiction to say that Christ is both finite and infinite, both localized and omnipresent? Second, how does this square with orthodox, Chalcedonian Christology? Does not positing a Christ who is both finite and infinite lead to the old Nestorian error of separating the human and divine natures of Christ?

There is a metaphor that has helped me understand this (at least, a little). Suppose J. R. R. Tolkien had written himself into The Lord of the Rings as a character in the story, walking around with Gandalf and Frodo and the others. He would not, of course, cease to exist in Oxford as a result of this fact (in fact, his entire existence in Middle-earth would depend on his continued writing in Oxford). Nor is it clear that the unity of his person or the laws of logic would necessarily be violated by such a situation. After all, Middle-earth and Oxford are not just different places in the same world, like Chicago and New York, but different “realms” or “worlds” altogether.

WHY DOES IT MATTER?

I would not personally insist that Christian traditions or individuals who deny the extra Calvinisticum necessarily and fully transgress orthodox Christology. Nonetheless, several important Chalcedonian concerns undergird the extra. It protects the divine nature of Christ as fully divine and immutable (unchangeable) even while forestalling the temptation to “divinize” Christ’s human nature—as, for instance, with those who have affirmed the ubiquity of Christ’s flesh in order to account for his bodily presence in the Lord’s Supper. As Kevin DeYoung summarizes,

The extra is an important doctrine in that it safeguards the transcendence of Christ’s divine nature (i.e., it cannot be contained) and the genuineness of the human nature (i.e., it does not possess attributes reserved for divinity).

By preserving the distinctness of the divine and human natures of Christ, the extra Calvinisticum helps us envision the incarnation as an addition, not a subtraction. That is, the Son of God does not shrink down to a tiny embryo in Mary’s womb, leaving his divine majesty behind him. Rather, he comes to us while remaining all he is. One study summarizes the significance of the extra this way: “The incarnation was not the eternal Son’s abdication of his universal empire, but the reassertion of that empire over rebellious creation.”

Beyond all of this, more basically, the extra Calvinisticum can help us marvel afresh at the wonder of what we celebrate each Christmas.

Just consider it! The One in the manger is both:

It certainly gives new meaning to the words we sing: Veiled in flesh the Godhead see, Hail the incarnate Deity.