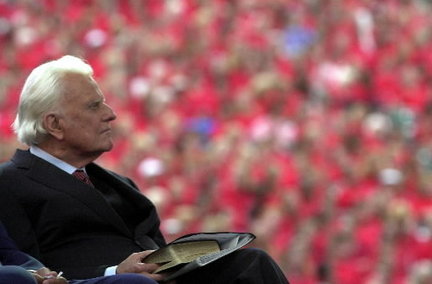 My wife, kids, and I recently had the chance to visit the Billy Graham Library in Charlotte, NC. We’ve long been impressed with Graham’s life and ministry, and this trip only increased our appreciation for Graham.

As I reflect on Billy Graham’s six decades of ministry, four words stand out:

As we looked over various exhibits and heard stories about Graham’s life, Veronica commented to me, “He wasn’t complex, and not usually ‘profound.’ But you can tell that he really believed what he was saying.” And it’s true: Billy Graham had struggled with the hard questions, so when he spoke with assurance, it wasn’t the naïve assurance of a neophyte. It was the absolute assurance of someone who has wrestled with questions of faith.

During the beginning of Graham’s ministry, theological liberalism was on the rise in mainline denominations, and Graham’s faith was shaken. He often told the story of a moment when, in the height of his doubts, he took a walk in the woods. During that walk, he finally acknowledged, “I either believe God has spoken or I don’t. I believe Jesus Christ is God’s Son, and I believe the Bible he authorized is his Father’s word, just like he said it was. I’ll believe it by faith—even the parts I don’t quite understand.” (my paraphrase)

Graham’s conviction was contagious. Conviction always is. It reminds me of David Hume, the 18th-century atheist philosopher, who consistently went to hear the preacher George Whitefield at his evangelistic rallies. Someone recognized Hume, and—surprised to see him there—said, “I thought you do not believe in the gospel.” Hume answered, “I don’t, but he does.” That was the draw that Billy Graham had at his rallies: he believed in his message so deeply that he drew in some of the most skeptical and non-believing.

At this point, you can’t name a single one of Billy Graham’s friends who drifted with the tide of theological liberalism; but Billy changed the world.

Graham’s conviction yielded a profound, often mysterious authority. Again and again, on public talk shows with Phil Donahue, Larry King, or Johnny Carson, his hosts would clarify or challenge what he was saying. “You aren’t actually saying…” they would begin. And Graham would interrupt to say, “No, Johnny, I’m not saying this. The Bible says this,” and then quote a verse of Scripture.

A number of well-meaning Bible teachers today say things like, “Well, people no longer accept the authority of the Bible, so saying ‘The Bible says so’ has no more weight in our culture.” And yet, no one in history has reached more people, from different cultures across six continents, than Billy Graham. People in Russia, Korea, and vast parts of Eastern Europe may have completely rejected the authority of the Bible; but that didn’t keep Graham from seeing incredible fruit there.

What characterized his preaching was his utter reliance on God’s self-authenticating Word. How often he retreated into it made even his most skeptical interlocutors curious: why would such a bold, intelligent, and successful man put all his confidence there? Many non-believers became so intrigued about the book that he really believed was the Word of God that they picked it up. And as they read it, many because convinced, as he was, that it was the Word of God. Their hearts “burned within them” as he preached, because he preached with a conviction that God’s Word and the gospel were true.

If you go back and listen to Billy Graham’s messages, you’ll be struck by their simplicity. He really saw himself, like the Apostle Paul, not as a wise man unveiling religious mysteries, but as a simple herald (2 Timothy 1:11). What J.I. Packer said of Paul was true of Graham:

“Paul in his own estimation was not a philosopher, not a moralist, not the world’s wisest man, but simply Christ’s herald. Paul’s royal master had given him a message to proclaim. His whole business therefore was to deliver that message with exact and studious faithfulness. He added nothing, altered nothing, omitted nothing.”

Graham took integrity so seriously that many in churches today know of the “Billy Graham Rule” – Graham would not meet with, travel with, or eat alone with a woman other than his wife. He knew that Satan wanted to disqualify his ministry, and he was fierce in his efforts to remain above reproach. The “Billy Graham Rule” has come under a lot of fire in recent years (and there are often good reasons to modify it), but in light of the number of high profile pastors who fall due to moral failure every year, we could use a good deal more of this kind of integrity.

One of my favorite stories illustrating Graham’s dedication to purity: Graham was staying in a hotel, and made his usual request to the hotel staff to turn off the cable in his room, so that he wouldn’t be tempted to watch anything he shouldn’t. They refused, and since it was too late to find a room at another hotel, Graham did what he thought he needed to: he yanked the cable right out of the wall. He made sure to pay for the damage, but his nonchalant response to the whole situation was perfect: “We can replace the television cable; we can’t replace integrity.”

Graham’s power flowed out of his walk with God. It wasn’t just a matter of sexual purity, either. Graham displayed a radically generous spirit with his money. As high profile as he was, it would have been easy to get rich off of his ministry. But as donations came in, he was open-handed in giving that money away. He had a message to proclaim, and would not be bought, no matter the price. As one pope said about John Calvin, “This heretic gains all his power by his utter disregard for money.”

As Graham often noted, the methods of how God works in the world change from generation to generation. But the core principles that shape ministry do not. Where are the preachers today characterized by these four qualities?