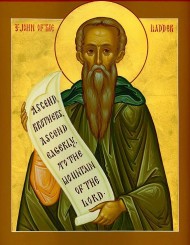 “Saint is one of the most widely misunderstood words in our Christian vocabulary. At some point in church history, people began to call the original apostles saints, contrary to the plain meaning of the word as used in the New Testament. So now we hear of Saint Paul, Saint Peter, Saint Andrew, and the like. In the Roman Catholic tradition, people of unusual achievement are sometimes designated as saints. Among evangelicals we often think of saints as exceptionally godly and holy people.

The truth is, though, every believer is a saint. That’s why Paul’s greetings in his epistles often include something such as, “To the saints who are in Ephesus” (Ephesians 1:1, see also Philippians 1:1,Colossians 1:2). Even when addressing Corinth, a church that was all messed up both theologically and morally, Paul wrote, “To the church of God that is in Corinth, to those sanctified in Christ Jesus, called to be saints. . . . (1 Corinthians 1:2). In fact, sainthood is not a spiritual attainment, or even a recognition of such attainment. It is rather a state or status into which God brings every believer. All Christians are saints.

It is a very unfortunate and unhelpful thing that we so often misunderstand this short, simple word. To use a word that applies to all Christians in a way that suggests there is a special, elite class of Christians is doubly wrong: it steals from the church important truths that God intended to communicate through the idea of sainthood, and it promotes jealousy and division within the body of Christ by suggesting a hierarchy that does not exist.”