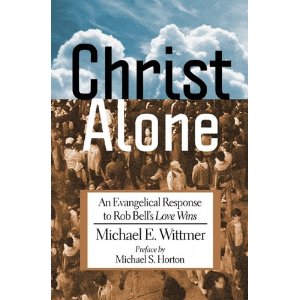 Mike Wittmer has done evangelicals a great service. He has penned an easy-to-read, thoughtful, and charitable response to Rob Bell’s controversial book, Love Wins. Wittmer is a professor at Grand Rapids Theological Seminary and has written books like Don’t Stop Believing: Why Living Like Jesus Is Not Enough

and Heaven Is a Place on Earth: Why Everything You Do Matters to God

is a tour-de-force, brilliant in its critique and gracious in its tone. I’ve always admired Mike Wittmer’s willingness to genuinely listen to the questions and concerns coming from people of differing theological persuasions. When the Emerging Church discussion was taking place, Wittmer readily admitted weaknesses and errors within evangelical theology that need to be corrected. But he never veered from his reliance on the authoritativeness of Scripture and the centrality of the gospel.

So now, Wittmer enters into the fierce debate over Love Wins in order to express his significant concerns about Rob Bell’s theology. Readers of Wittmer’s response will discover that the issues at stake are not just about hell and the afterlife. Theology is connected. He writes:

Theology, or our understanding of God, is more like a sweater than a smorgasbord. We can’t logically walk up to the Bible buffet and load up on the teachings we like while skipping the ones we don’t: give me an extra helping of love but hold the stuff about wrath. Instead, our beliefs about God and the Christian life are intertwined like the strands of yarn in a cable-knit sweater. When we tug on one, the others tend to come, too. (2)

Wittmer’s goal in this book is to help the reader understand the biblical and theological issues at stake. He also wants readers to embrace or reaffirm the traditional perspective on these matters. Unlike Bell, Wittmer is clear:

Christ Alone is divided into ten chapters, each of which corresponds (roughly) to the main ideas of Love Wins. One of the ways that Wittmer makes his case is by asking the kind of questions about Bell’s theology that Bell asks about evangelical thought. The difference between the two books is not just the theology expressed, but also the tone in which the discussion takes place. Bell openly mocks the traditional view, caricaturing evangelicals and making snide comments about those who hold to such belief. Wittmer, however, interacts with Bell’s arguments in an evenhanded, charitable way that is certainly firm, but never mean-spirited.

The result is that Wittmer ably models how to engage in theological debate, even as he distinguishes error from truth in Bell’s work. This book offers sound advice that goes beyond the debate over Love Wins and is applicable to anyone who wants to wisely study the Scriptures. Here are some examples:

Then, there are the moments where Wittmer turns the tables on Bell’s argumentation. Whereas Bell worries that a traditional view of hell leads to a skewed vision of God, Wittmer worries that Bell’s theology leads to cynicism about God’s character. Here are questions to ponder:

Wittmer’s biggest problem with Love Wins is not Bell’s views on heaven and hell. (In fact, in the chapter on heaven, Wittmer sympathizes with Bell’s robust vision of a renewed earth, a subject that Wittmer has written extensively about.) No, the big problem is what Bell does with our view of God, sin, and grace.

“Love Wins attempts to make our judgment about God rather than about us. Rob Bell effectively puts God on trial.” (124)

“If there is no looming threat of wrath and hell, then there is little for God to do except be generally kind to everyone. That may be nice, but the Bible wouldn’t say that this God is love.” (146)

“If we say that a loving God would never send anyone to hell forever, we are already assuming that no one deserves to stay there.” (57)

“[Bell] never indicates that God himself is rightly offended and wrathful toward our rebellion.” (88)

“Jesus’ death on the cross is an act of love only if it actually accomplishes something.” (95)

“[Bell] never mentions that we might need special, redemptive grace, either to choose what is right or to be saved.” (92)

Christ Alone is a terrific response to Love Wins. Mike Wittmer has carefully evaluated Bell’s interpretation of Scripture and has written a response that is full of pastoral wisdom and biblical insight.