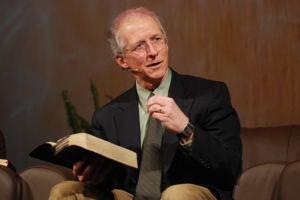 “Christ is the glory of God. His blood-soaked cross is the blazing center of that glory. By it He bought for us every blessing–temporal and eternal. And we don’t deserve any. He bought them all. Because of Christ’s cross, God’s elect are destined to be sons of God. Because of His cross all guilt is removed, and sins are forgiven, and perfect righteousness is imputed to us, and the love of God is poured out in our hearts by the Spirit, and we are being conformed to the image of Christ.

Therefore, every enjoyment in this life and the next that is not idolatry is a tribute to the infinite value of the cross of Christ–the burning center of the glory of God. And thus a cross-centered, cross-exalting, cross-saturated life is a God-glorifying life–the only God-glorifying life. All others are wasted.”

12 thoughts on “Everything flowing from the cross”